If These Walls Could Talk, the Stories They’d Tell 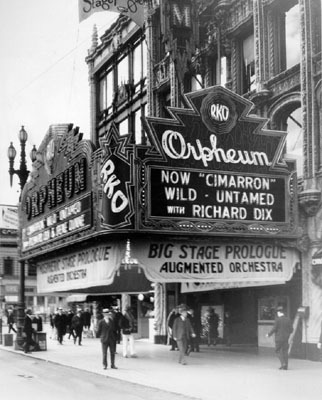 For the first three years it operated, the theatre at 1192 Market St. was called the Pantages Theatre, named after owner Alexander Pantages. By the time the theatre was built in 1926, Pantages had already been in the theatre business for more than 20 years and was running some 30 vaudeville houses across the West Coast. Before Pantages decided to focus his energy on theatre, he had had many other occupations.

At the age of 9, Pantages ran away from his family in Greece and traveled the world for 12 years working as a deckhand. After years of seafaring, he caught word of the Klondike Gold Rush and went to the Yukon Territory to try his luck at prospecting. Shortly thereafter, he settled in Dawson City—the center of the Klondike Gold Rush—and had a brief, unsuccessful career as a welterweight boxer. Pantages quickly discovered his passion for theatre while working as a janitor and waiter at a local burlesque club. The restless young man’s ambition was sparked, and before long he was booking and staging live performances all over Dawson City, eventually opening his own theatre in town.

Pantages went on to create a successful theatre circuit that spanned across the western United States and Canada, with the majority of his business centered in Seattle. On Feb. 20, 1926, Pantages opened his first theatre in San Francisco and impressed audiences with an elaborate seven-act vaudeville show that featured a miniature comic opera, a full-scale ballet, the famous dog movie star Rin Tin Tin, and stand-up comics such as Syd Chaplin (brother of Charlie). Along with the dazzling performances, theatregoers were equally enthralled by the theatre’s lavish architecture.

Pantages chose Scottish-born architect B. Marcus Priteca to design the new theatre in San Francisco. Priteca, who had worked on almost every theatre in Pantages’ circuit, had an exceptional ability to consistently produce distinctive buildings. His vision for the Pantages Theatre was inspired by medieval Spain and has strong tones of Moorish-Gothic architecture.

Priteca modeled much of the theatre after a 12th-century cathedral in Leon, Spain, and the vaulted ceiling, which features more than 130 lions along with figures from Spanish folklore and myth, was designed to resemble one in the Alhambra. The theatre’s grand proscenium displays crusaders and pilgrims, underlining the religious concerns that so strongly defined the culture of medieval Spain.

By 1929, interest in vaudeville began to wane and the stock market had crashed. Pantages’ fortunes dwindled, forcing him to sell his theatre to RKO. The new owners brought about dramatic changes, transforming the venue into a cinema and renaming it the Orpheum.

SHN gained ownership of the Orpheum in 1981, and in 1998 launched a multimillion-dollar restoration, enlarging the stage to accommodate larger touring Broadway shows. Among its many accolades, the Orpheum Theatre is an official San Francisco designated landmark and presented the U.S. premiere of the hit Broadway musical Mamma Mia! in 2000. 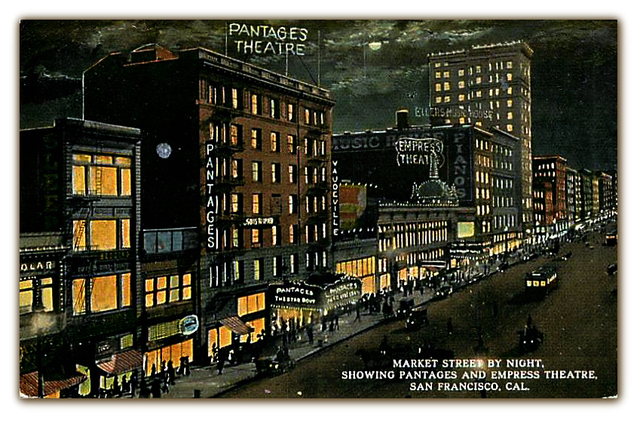 Operated by Alexander Pantages first as a vaudeville theatre, the Pantages Theatre opened on December 30, 1911 and operated until February 13, 1926, when the New Pantages Theatre (later Orpheum Theatre) opened at 1192 Market Street. Courtesy of Cinematreasures.org